How sleeper recruits still make the NFL, despite blue-chip dominance

Share All sharing options for: How sleeper recruits still make the NFL, despite blue-chip dominance

Every year around NFL Draft time, writers from all over the country put out troublesome columns like this one, claiming that a five- or four-star recruit’s chances of making the NFL are roughly equal to those of three- or two-star recruits.

If you are a high school football recruit and you aren't considered a four- or five-star recruit there is no need to panic. Your chances of being a future NFL first round pick are just about as good as those guys who receive all the attention.

Don't believe me? I spent this afternoon looking up the recruiting backgrounds of the Top 50 NFL Draft Prospects according to ESPN and found some intriguing information on how many stars they were given in high school. Of the top 50 players expected to be taken over the next three days, Rivals.com rated 26 either 4- or 5-star recruits and 24 were 3-star recruits or worse according to the scouting website.

That was for the 2014 draft class. We’ve since eyeballed the trends in every draft along the way, and there’s yet to be a year that’s a clear outlier.

And as it has been for the entire history of mainstream recruiting rankings, this assertion is false. And misleading to recruits.

To his credit, Navarro amended his column to read, "Your chances of being a future NFL first round pick aren't impossible," after an exchange. But why do so many columnists fall victim to this logical fallacy each year in the first place? A lack of perspective and understanding of probability. Let's dig into what they're missing.

Each year, roughly 4,500 football players sign Division I scholarships. In 2010, the year from which most of the prospects in the 2014 draft came, 27 were rated as five-stars by Rivals, considered no-doubt, superstar-type players. There were 395 four-stars, a designation for very good players, and 1,644 three-stars, or good players. And 2,434 were rated as two-stars or not rated at all, meaning they were at the lowest levels of Division I. The national percentage of high school players to become blue-chips, year after year, is basically a rounding error.

If, as many columnists maintain, the chances of a two-/three-star being drafted in the first round are "just about as good as those guys who receive all the attention," we would expect the following results in the first round, based on the distribution of players:

But nobody would actually expect that result.

The actual breakdown from that year:

That's not close to the same.

Four- and five-star recruits were 995% more likely to be drafted in the first round than their lesser-ranked counterparts.

Here's the breakdown of the draft:

Obviously, there are limitations to this analysis. Even if all 256 draft picks were two-star/unrated recruits, that would still leave 2,178 undrafted from that category. The maximum percentage drafted from that level, given the constraints of the draft, is 10.5%. The sheer quantity of two-stars and unrated signees means they can’t come anywhere near all being picked, even if they all somehow overachieve.

The point is: the chances of a lesser-rated recruit being drafted in the first round are nowhere close to what they are for a blue-chipper.

Consider this, again using 2014: While four- and five-star recruits made up just 9.4% of all recruits, they accounted for 55$ of the first and second round. Any blue-chip prospect has an excellent shot of going on to be a top pick, if he stays healthy and out of trouble.

For those who don't like percentages, here are some more intuitive breakdowns based on the numbers from the entire 2014 draft:

And if the two-stars didn't already have enough going against them, keep in mind that the data set of two-star and unrated players included three kickers and punters (who are rarely rated above two stars), two players who originally went to college on basketball scholarships and later picked up football, and a player from Canada (foreign players are almost never rated). 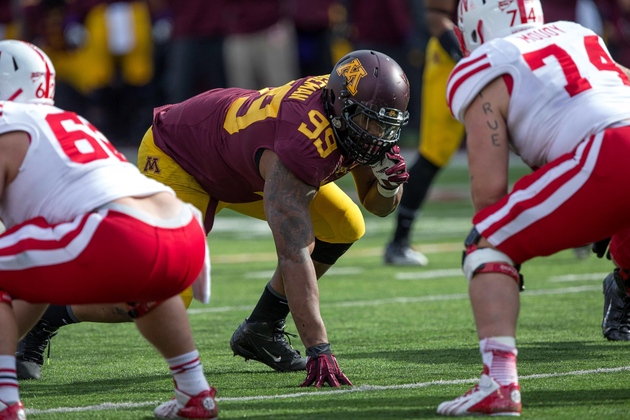 Ra'Shede Hageman was a 250-pound high school tight end with one scholarship offer. Then he gained 60 pounds in college and became a second-rounder. Jesse Johnson, USA Today

Sometimes, colleges and recruiting analysts simply misevaluate players. More often, however, when a low-rated recruit becomes a big NFL prospect, there is an explanation for why the prospect was rated as he was. Here’s how 2019’s non-blue-chip first rounders broke down as high school recruits:

Let's look at a two-star recruit from the first round of 2014, Buffalo linebacker Khalil Mack.

Mack played at a high school that, while not a powerhouse, is not exactly a stranger to producing DI recruits. Westwood High School in Ft. Pierce, Florida, has produced seven since 2003. So why was Mack rated a two-star? A perfect storm, really:

Mack was a prep basketball player who as a junior suffered a patella tendon injury that threatened his high school athletic career. He returned to health stronger than before, but he wasn't even thinking about football until Ashmon phoned Mack's dad early in the teenager's senior year and promised him that if he allowed his son to pick up a new sport, he'd go to college for free.

So Mack not only was coming off an injury, he had no film to send out to college coaches from his first three years of high school. And while he was very athletic, he did not yet have great football skills.

It is fair to say that recruiting services and major football powers missed on Mack. He made 140 tackles during his senior year, and he had a teammate headed to Miami. That should have been enough to get him noticed. Yet a YouTube search does not turn up any video. A player making 140 tackles in a season on a very good high school team should have a highlight tape, but Sports Illustrated indicated that Mack did not have much film.

That is not on schools or recruiting services — it is the responsibility of someone connected to the athlete to get film out. Recruits cannot rely on college coaches being at their games every Friday night, not when there are thousands every week. This is also how some stud athletes end up slipping to FCS:

Prospects may not have enough highlight footage to send to big programs, or may not know how to send it (or whom to send it to). Coaches, either at the high school or college level, can leave for other jobs, leaving the prospects in limbo, hoping they're not forgotten. That's where FCS schools come in -- they are able to limit themselves geographically while also looking at a wider range of talent sets (late bloomers, players new to the game, etc.).

Most elite players emerge fairly early in their high school careers, and it makes good sense for colleges to focus on them. By the time Mack was finishing up his senior season, the evaluation process at many big schools was focused on juniors and sophomores. And recruiting services follow the evaluation timelines of major schools pretty closely. Missing on players like Mack is a risk big schools are willing to take, because so few players fitting Mack's profile exist.

And players like Mack don't always go unnoticed. Take Eddie Jackson, a player from close to Mack's high school who did not play as a junior, but burst onto the scene as a senior because his film got out. He signed with the Tide and became a Pro Bowler.

The late-blooming two-star who blows up in the college weight room is somewhat common, but nearly impossible to predict.

Every year, we see former low-rated recruits get drafted who look nothing like they did in high school. In the 2013 draft, that group included the #1 pick, CMU's Eric Fisher.

From that same 2014 draft class, contrast the following low-rated recruits with #1 pick and #1 recruit Jadeveon Clowney, who gained only 10 pounds between high school and the Combine, and #44 pick and #2 recruit Cyrus Kouandjio, who only gained seven:

Recruiting analysts and colleges must project a player to the college level, and part of that entails how much weight he can add to his frame. If a player appears to be maxed out, it can hurt his rating. On the other hand, a player with great length and a wide frame might be rated higher, because of his potential to add weight in a college strength program.

But that has limitations, and the majority of undersized players with promising frames are unable to blow up in the weight room while still retaining athleticism. College coaches and recruiting analysts would lose their jobs if they projected every slender prospect to add the type of muscle these guys did.

Four- and five-star players rarely blow up to this extent. And there’s a reason for that: they are already further along in their physical development. Thus they offer greater certainty to the school and are able to be productive much earlier in their careers.

Next Up In Post-grad football